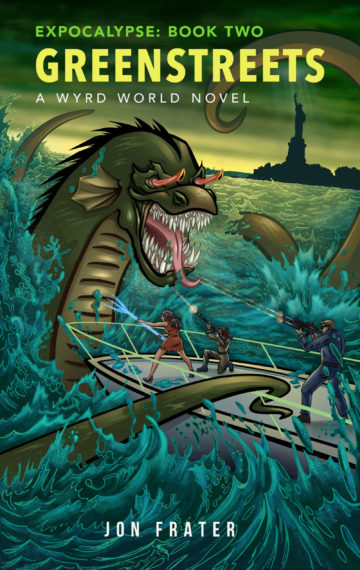 Julie Meyers is having a bad week. After defeating the Broadway Bull the former Hungry Corp. sales jock thought that fleeing New York City on a borrowed yacht with a few allies would be a quick path to freedom. Just head north on the Hudson River and leave the end of the world behind. But the Hungries neither forgive nor forget and Julie is still in their cross hairs.

Faced with an evil she can’t truly comprehend much less combat, all she wants now is to get home to her terminally ill mother and find some peace before the world ends.

Roving hordes of Slicers, opportunistic survivalists, and Black Hand soldiers stand in her way while a new player, hand-picked by Anatole Hunger, is gathering his power to wipe her off the board for good.

Now she must lead a ragtag band of fugitives—surviving co-workers, a wounded sea captain, a rogue NYPD detective, a fifth-grade gymnastics class and their helicopter parents—through the streets of New York City to safety.

If she fails, not only will she and her charges die, but the soul of the city she calls home will be lost forever…