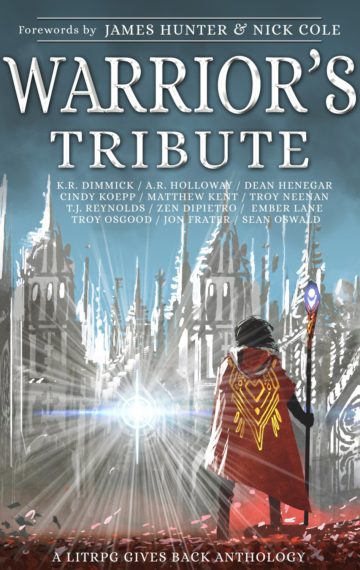 Buy Now!Read A SampleSee The Reviews

This collection of 12 short LitRPG / Gamelit / Wuxia stories came about as a labor of love and a desire to give back to those who serve and protect us all in the armed forces. Each of these stories is an original crafted by some of the best authors in the LitRPG / Gamelit community in response to the prompt “Stories of Sacrifice.”

We all wanted to pay homage to those who’ve sacrificed for all of us.

All of the funds from this anthology go directly to the Wounded Warrior Project as part of our “LitRPG Gives Back” campaign. We hope you enjoy these stories just as much as we enjoyed writing them. Here is a short description of each of the stories.

A level 1 cultivator has the opportunity to change the fortune of his entire clan and gain Imperial favor, or trade it all for an unexpected opportunity no one knew existed.

One knight and his squire take a stand as their kingdom begins to crumble, protecting refugees from those who have betrayed their sacred duty.

In a changed world, a routine patrol in Afghanistan will bring a combat medic and his unit up against a creature from myth and nightmare.

Using the power of music, Lyra finds an unusual way to contribute to her team’s victory.

Being a father is never easy. Serving, while being a father can lead to the impossible, when all you need is one more day…

Friends, beer, phones, and an excellent roll of the dice.

Guardian of the Wild

Have you ever tried to please the demands of a Dwarven smithmaster? I certainly haven’t been able to. Join me on the day when this axe girl ran away from her duties, finding something deeper and more powerful than any forge fire can produce.

Two champions, strangers to one another, get teamed up in Darvonstone, where they must find the cure to the Wasting. But why does one of them seem to know more than they should about this strange world?

How far would you go to protect your own?
How hard would you fight to defend your guild?
How much are you willing to sacrifice to avenge your hive?

Krim is a player. That means he’s special. NPCs are just lines of computer data, capable of only doing what they are coded to do. Or are they?

What is Real, Anyway?

Two corporate headhunters watched their careers run aground after losing a fight with a brilliant tech recruit. Three years later, they’ve located her and vow revenge. But when they see she’s protecting far more than they imagined, will they help her succeed…or risk losing everything?

A Fairy Tail In Reverse