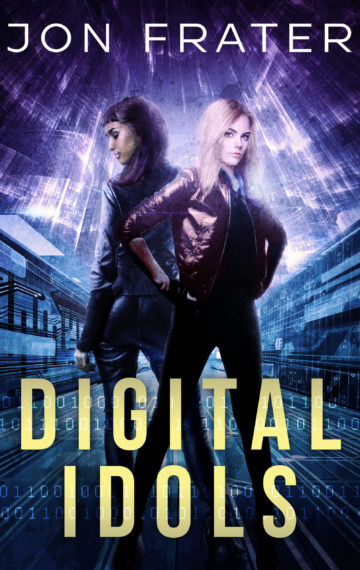 $2.99Buy Now!Read A SampleSee The Reviews

In the depths of the Tarterus Corporation, a unique experiment in bioengineering has gone wrong . . . and right. The world’s economy is controlled by building sized “Megabrains” which can only be controlled by cloned “Genetics.” A young pair of twins, specially created by the world-regulating Bioengineering Guild, has just discovered their roles in a plot to micromanage the world’s population . . . and want no part of it.

Blade Runner meets Barbarians at the Gate as Norma and Cloris go head-to-head to decide the fate of the world–and settling their family feud is the only way to do it!

In a call-back to “The City of Iron and Light,” which appeared in Chronicle Worlds: Feyland, Digital Idols is the story of Norma Phastlight, the only Genetic to ever walk out of the Tarterus Crop.’s laboratories and try to navigate the cold, hard, world of 22nd century hypercapitalist America.